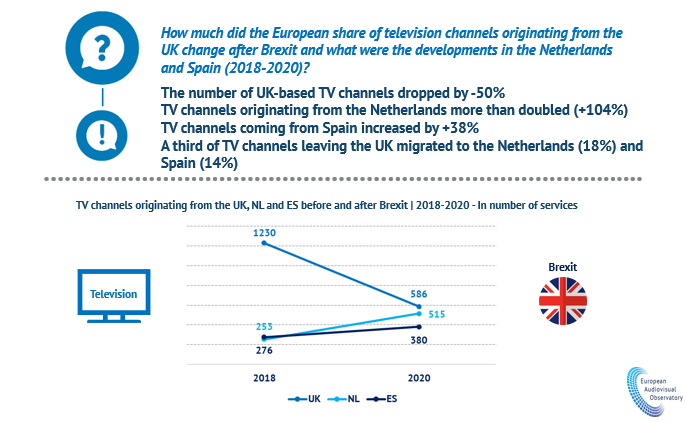 Based on the analyses of 2020 figures from the Observatory’s MAVISE database, this publication offers insights from two perspectives.

The first focuses on the supply of audiovisual media (AV) services in Europe, presenting figures for television (TV), on-demand services and video-sharing platforms available in and originating from the European markets. It also includes information on AV services aimed at non-domestic markets.

The second perspective looks at which countries and which legislation cover these services, in other words the jurisdiction claims made under the revised European Audiovisual Media Services Directive (AVMSD), including the criteria on which these claims are based.

The data available in MAVISE and used for this report are based on the contributions of the audiovisual regulatory authorities in the EU27, Albania, Armenia, Bosnia and Herzegovina, Georgia, Iceland, Liechtenstein, Montenegro, North Macedonia, Norway, the Republic of Serbia, the Russian Federation, Switzerland, Turkey, the United Kingdom and Morocco.