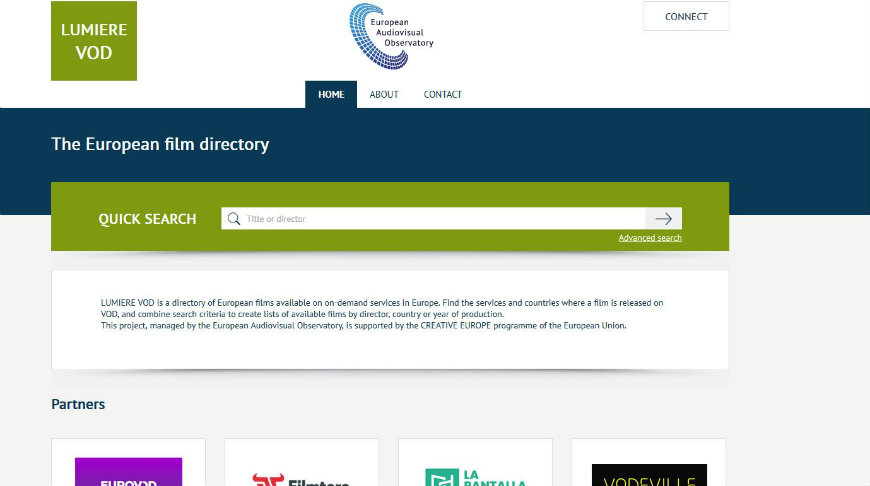 LUMIERE VOD - the online directory of European films available in the EU – helps professionals, public authorities and cinephiles everywhere to find information about European films and their availability online on video-on-demand (VOD) services throughout the European Union.

This transparency tool, supported by the European Commission and managed by the European Audiovisual Observatory, has now nearly doubled the data available. It includes information coming from 305 different VOD catalogues available in 32 European countries. In total, 37.000 European films have been listed.

LUMIERE VOD was launched as a beta version in Strasbourg in April 2019 by Mariya Gabriel, the EU Commissioner for Digital Economy and Society and Thorbjørn Jagland, the Council of Europe’s Secretary General at the time, following a thorough dialogue with the stakeholders. This was made possible thanks to the precious involvement of key players such as JustWatch, Amazon Prime Video, Ampere Analysis, Netflix, Chili, CNC, the Members of the EuroVOD network, Filmtoro, La Pantalla Digital and Apple who have volunteered to share their data.

Following this successful test, the Commission and the Observatory have decided to proceed with the final launch of the LUMIERE VOD service, as anticipated, while paving the way for future updates and improvements. In 2020, the Directory will be updated quarterly and will be used to cover progressively other audiovisual content, such as TV series, for the benefit of its users.

The Commission and the European Audiovisual Observatory hope that this data portal designed with professionals and providing greater transparency on the European VOD market will contribute to provide the right incentives and to stimulate a mindset of cooperation among all stakeholders committed to increase the presence, visibility and circulation of European films across borders.