New study explores the relation between theatrical and VOD distribution

Download the report VOD distribution and the role of aggregators in English.

A new report by the European Audiovisual Observatory explores the relation between theatrical and transactional VOD (TVOD) releases, pinpointing existing distribution trends and strategies. The report has been financed by the European Commission.

By identifying how many titles are available both on online TVOD platforms and in cinemas in the same EU countries, this publication investigates the level of geographical proximity between the theatrical release of a given film and its availability on TVOD services.

Drawing on data from LUMIERE, the European Audiovisual Observatory’s film admissions database, the analysis is based on films:

This data has been matched with data on the contents of film catalogues on TVOD platforms in the EU, collected via a dedicated web-scraping software tool. Even if the territories of theatrical and VOD distribution do not fully overlap, the analysis suggests that the exploitation in cinemas and the availability on VOD are interlinked. 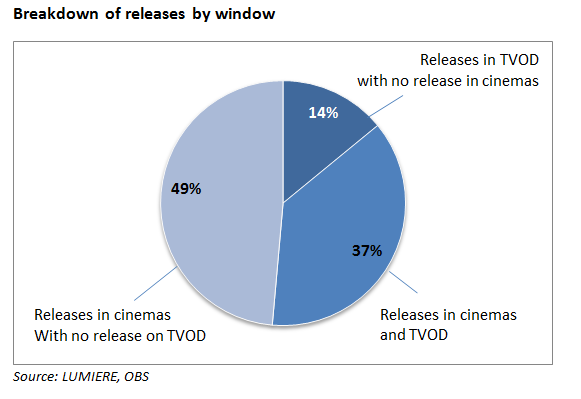 Taking into account all cinema and VOD releases across all territories monitored, the report found that only 37% of all releases were made BOTH in cinemas and on VOD in the same country

About 1 out of 7 TVOD releases takes place in a country where the film has not been released in cinemas. 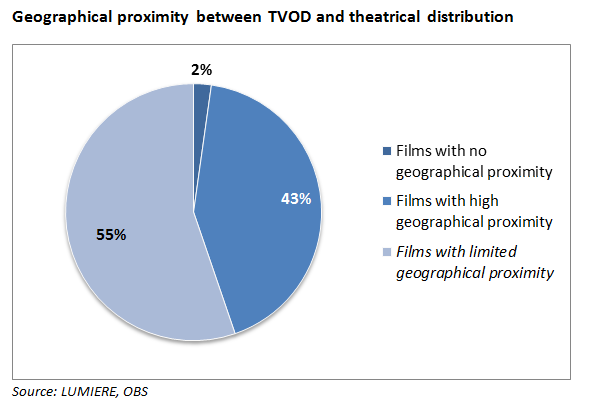