Only 16% of Europe’s film heritage collections has been digitised

On the occasion of the opening of the Cinema Ritrovato festival – one of the major events for cinephiles across the world taking place every year in Bologna, Italy - the European Audiovisual Observatory has just released a new study on the access to film works contained in Europe’s Film Heritage Institutions and collections in the context of education and research.

Key findings of this report 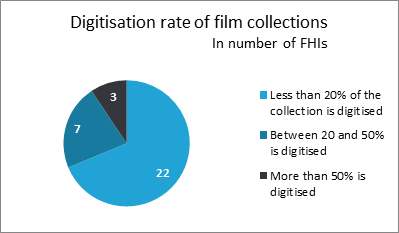 Online access seems to be an efficient way to improve the access to film collections and expand the audiences but FHIs face legal limitations or uncertainty on how to grant this.

Drawing on the results of a survey targeting the members of the ACE (Association des Cinemathèques Européennes), the report seeks to assess the volume of film works in the collections of European Film Heritage Institutions that are accessible for research and educational purposes, considering both consultations by individual researchers and screenings organised within school or university activities. The study aims at assessing both the demand for films and the extent to which Film Heritage Institutions are able to meet this demand, while pinpointing existing practices and arrangements in the access to films.

The publication also identifies crucial aspects and challenges, touching upon issues such as rights clearance of film works for educational purposes and highlighting the role of digitisation in improving access to films. Finally, the study explores key topics such as the copyright status of the films in the collections, with special attention to orphan and out-of-commerce works.

This study is the second part of a broader research project on Film heritage, financed by the European Commission. The first phase of the project – The Exploitation of Film Heritage Works in the Digital Era – aimed at investigating the commercial value of film heritage works, assessing their performances across the different distribution channels (cinemas, TV channels, DVD, VOD). The first report can be downloaded here. This first study sets out in particular to assess the presence of European film heritage works on VOD catalogues and what visibility these films actually receive online.

The main hurdles faced by European film heritage, this first study finds, are similar to the challenges applicable to European arthouse works: