UK TV programmes make up the lion’s share of EU TV content available on Netflix and iTunes, followed by France and Germany

A. TV content in the catalogues of Netflix and Apple’s iTunes 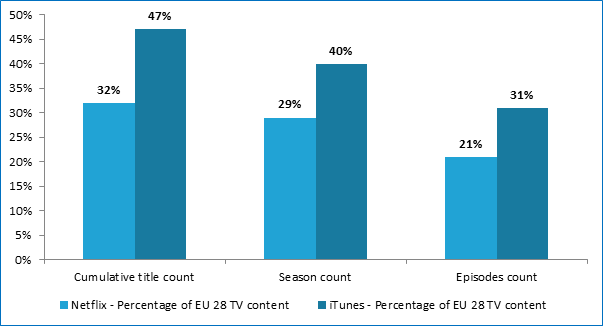 These are the findings of a report on the origin of films and TV content in VoD catalogues in the EU & visibility of films published by the European Audiovisual Observatory. Download it free here.

The differences in the catalogues are more visible when national content is taken into account: iTunes offers a much higher share of national TV content than Netflix. The use of the iTunes platform for national broadcasters and right holders to monetize their TV content could explain this difference combined with the difference in business models. Netflix has to “buy” the rights for each TV programme whereas iTunes doesn’t, thus enabling it to offer a larger quantity.

Regarding US TV content, the share of the two services are much more closer; between Netflix and iTunes offer respectively 48% and 42% of US TV content when titles are counted, 56% and 50% when seasons are taken into account and finally 60% and 55% respectively when episodes are counted. This reflects the fact that US scripted TV series included in the two catalogues last for longer seasons with more episodes. 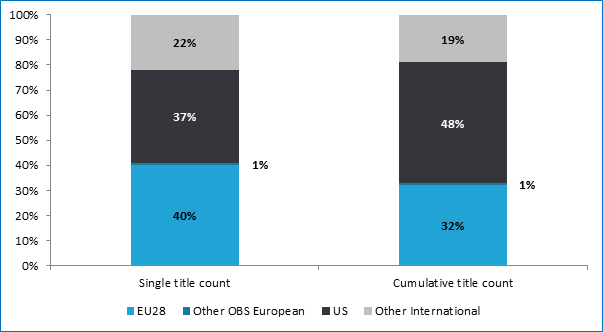 B. Most successful genres on Netflix and Apple’s iTunes

The genres which seem to work (read: circulate the widest on these two services) the best for EU TV programmes are children animation series (the German Die Schule der kleinen Vampire, the French Mouk, the Spanish Suckers, the Italian PopPixie or the Finnish Angry Birds) and scripted crime and drama TV series (such as the UK’s thriller series Luther and Peaky Blinders, the Swedish The Killing or the French Au service de la France). Another genre of TV programmes well represented in the top lists is TV documentaries (such as the BBC’s Africa, the French Vu du Ciel or the German Gehemnisse des Zweiten Weltkriegs). The data sets available in this free report show that UK, French, Danish and Swedish TV programmes dominate the EU top list of TV programmes.

The share of TV content on Netflix and iTunes is measured in 3 ways: on a title basis, on a season basis and on an episode basis. Regarding EU 28 TV content, the impact of the measurement chosen is important. On a title basis, the EU content offered in 8 Netflix catalogues ranges from 39% in Germany to 27% in Denmark  On a season basis, EU content ranges from 34% in the United Kingdom to 24% in the Netherlands. On an episode basis, the share drops further, ranging from 26% in Germany to 17% in Denmark. For the three country catalogues of iTunes the share varies from 52% in Germany to 43% in the United Kingdom when titles are considered. When seasons are taken into account, the percentage range falls to 41% in France to 39% in the United Kingdom. When episodes are taken into account, the shares drop furthermore to 35% in France to 28% in Germany

The TV content offered in the catalogues studied is largely scripted TV series but not only. For European TV content, several TV documentaries, children’s animation TV series, TV fiction films and TV mini-series are also on offer. For US content, unscripted TV shows (reality TV shows) are not uncommon in iTunes catalogues.

Download the report: Origin of films and TV content in VOD catalogues in the EU & Visibility of films on VOD services