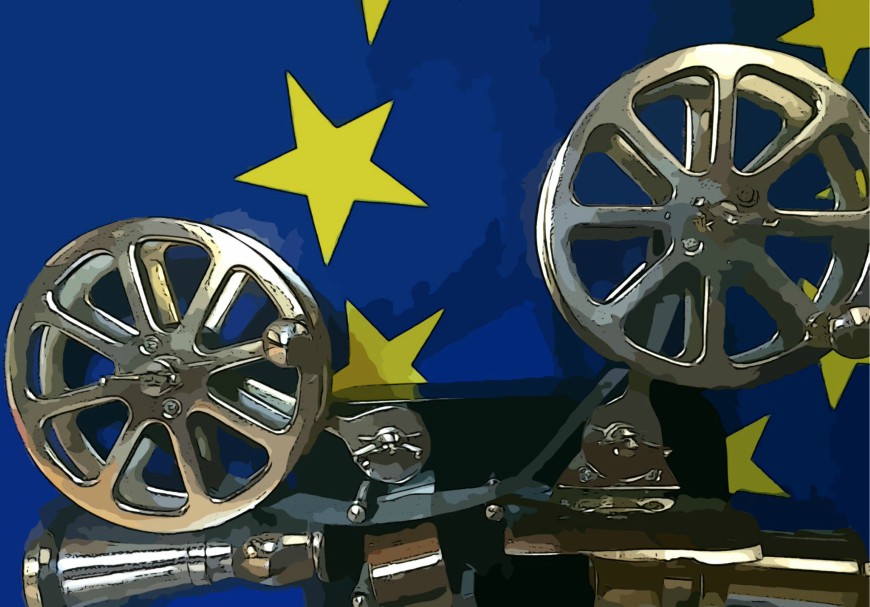 Based on provisional data, cumulative GBO in the EU Member States topped the EUR 7 billion benchmark once again, reaching an estimated EUR 7.02 billion in 2017. While dropping 0.3% on the previous year, this still represents – not adjusted for inflation – the third highest level ever recorded. With the pan-European average ticket price stable at an estimated EUR 7.1, the decrease in GBO was mainly driven by a slight decline in cinema attendance, as admissions dropped 0.8% to a total of 984 million (-7.6 million tickets sold), still marking the third highest level in the EU since 2004. Measured in local currencies, GBO grew in an uneven manner across the EU, as it increased in 19 and decreased in 6 of the 25 EU markets for which provisional data were available. Geographically speaking, GBO growth was strong in Central and Eastern Europe, recording a solid upturn in the Slovak Republic (+EUR 5.5 million, +18.9%), Lithuania (+EUR 2.7 million, +15.2%), Poland (+PLN 104.9 million, +10.8%) and Romania (+RON 25.0 million, +10.3%). Out of the five major EU markets, a moderate rise in the GBO was registered in Germany (+EUR 33.1 million, +3.2%) and the UK (+GBP 50.7 million, +4.1%), while revenues remained relatively stable in France and Spain.

Outside the EU, Russian GBO soared by 9.5% to RUB 53 283.8 million, boosted by an unprecedented increase in cinema attendance (+10.0% to 212.2 million tickets sold), and this made Russia the biggest European market in terms of admissions last year. In Turkey, GBO takings increased 25.9%, rising to a record-breaking TRY 871.0 million, driven by an exceptional growth in ticket sales (+22.1%). 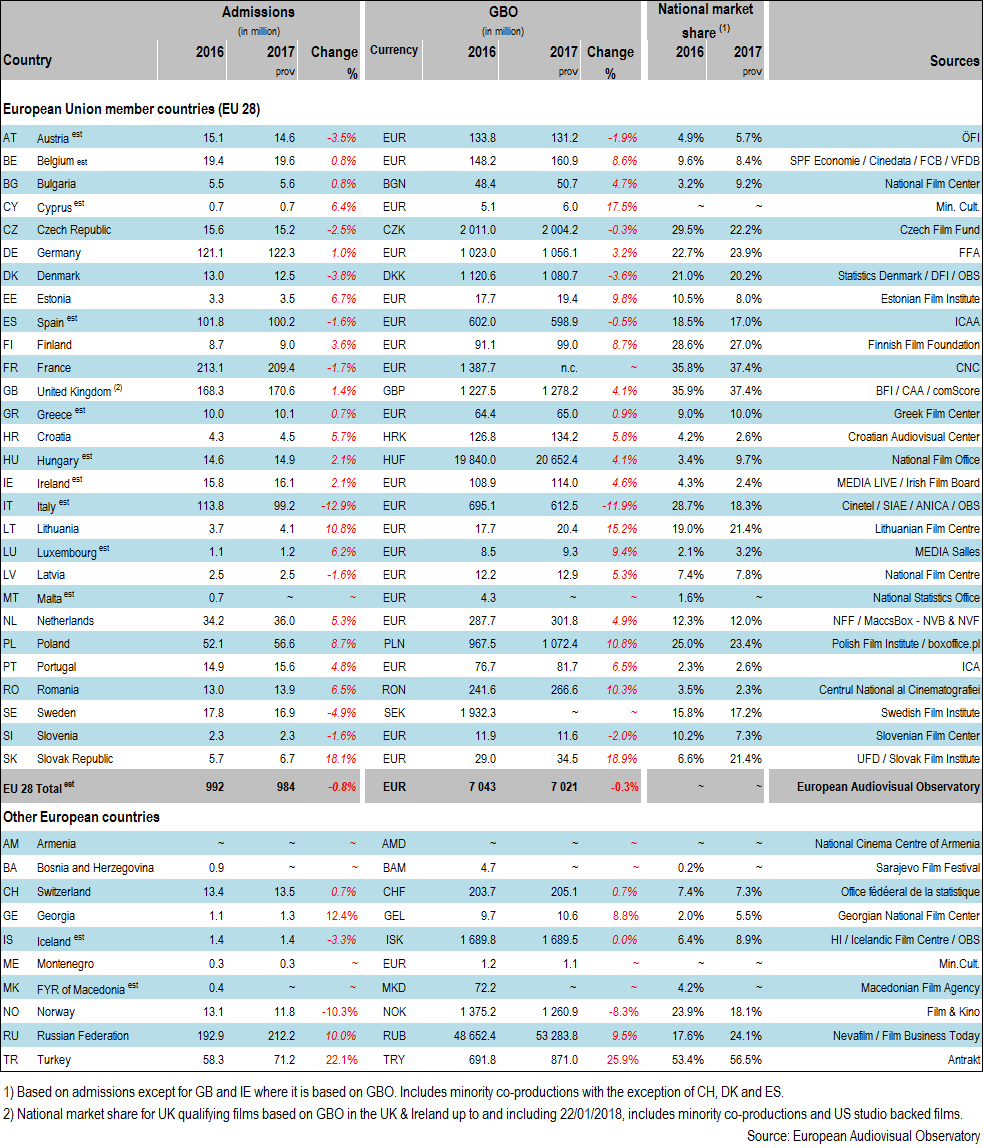 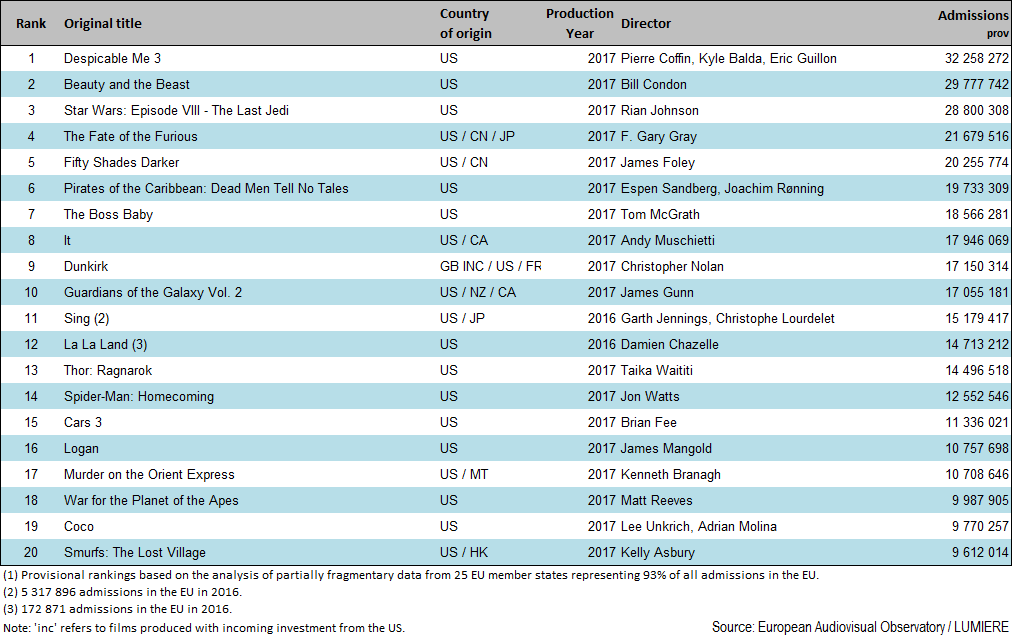 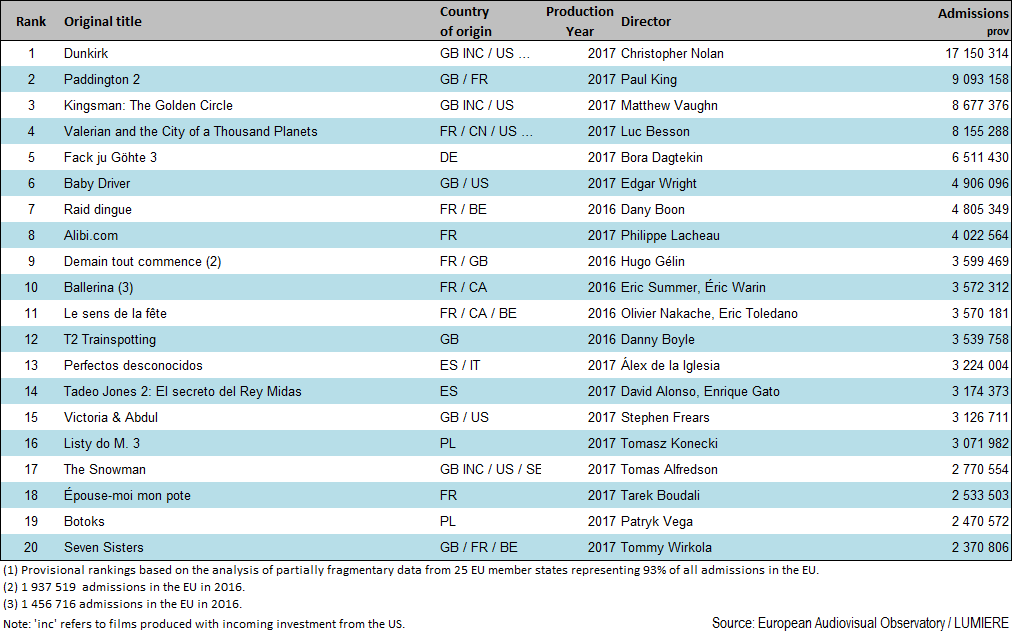 EU production levels showed a moderate downturn as the estimated number of European feature films produced in 2017 dropped from 1 741 to 1 676 (-3.7% down on 2016), reversing a long-established growth trend. This figure breaks down into an estimated number of 1 072 fiction films (64%) and 604 feature documentaries (36%). The decrease in production activity was primarily linked to the decreasing number of 100% national films, accounting for 68% of the total fiction production volume in 2017.

According to figures provided by MEDIA Salles the digitisation process in the EU is almost complete. By the end of 2017 a total of 24 EU member states had converted 90% or more of their screen base with only two territories registering digital screen penetration rates below 80%: the Slovak Republic (77%) and the Czech Republic (51%)[1]. By the end of 2017 the total number of digital screens was 30 735, accounting for an estimated 93% of the EU’s total screen base.

Set up in December 1992, the European Audiovisual Observatory's mission is to gather and distribute information on the audiovisual industry in Europe. The Observatory is a European public service body comprised of 41 member states and the European Union, represented by the European Commission. It operates within the legal framework of the Council of Europe and works alongside a number of partner and professional organisations from within the industry and with a network of correspondents. In addition to contributions to conferences, other major activities are the publication of a Yearbook, newsletters and reports, the compilation and management of databases and the provision of information through the Observatory's Internet site.

The pan-European film rankings shown in tables 2 and 3 are based on data from all European Union countries for which results have been stored in the LUMIERE database as of 13th April 2018. This database on admissions to films released in Europe is available on-line and free-of-charge, and is the result of collaboration between the European Audiovisual Observatory and various specialised national sources as well as the MEDIA Programme of the European Union. LUMIERE provides country-by-country analysis of admissions for about 66 000 films in distribution in Europe since 1996. Partial 2017 data for 25 European countries is now available, including data for the major European Union markets, as well as data for the North American market.

The provisional data on market shares in the European Union in 2017 shown in table 4 are based on the data on admissions to individual films as collected in the LUMIERE database on 13th April 2018. At this date the coverage rate of the database for admissions in the 25 European Union countries for which data is available was of around 93%. Due to various gaps in data collection and delivery in various countries, coverage of 100% of admissions is currently unachievable.

The European Audiovisual Observatory
will be present at the Marché du Film, Cannes

Compiled by the European Audiovisual Observatory and published by the Marché du Film.

Our FOCUS publication will be on sale via our online shop

We will also be selling it on our stand in Cannes