These figures are taken from the European Audiovisual Observatory’s new report: The Origin of films and TV content in VOD catalogues in the EU & Visibility of films.

The Strasbourg-based Observatory, part of the Council of Europe, has analysed figures provided by AQOA dating from October 2016 and concerning 5 sample countries: Great Britain, France, Germany, the Netherlands, and Belgium. 42 different VoD platforms were examined.

Number and breakdown of promotional spots 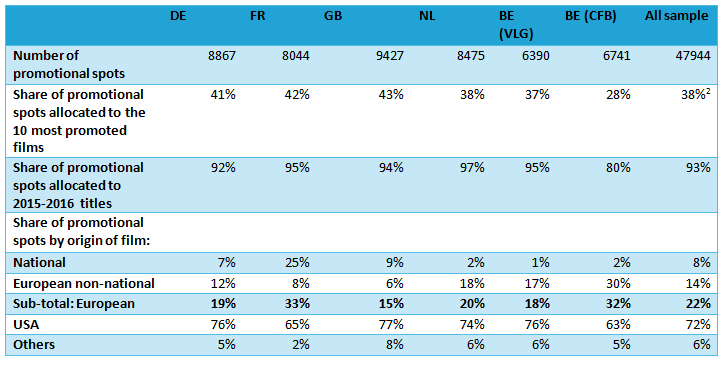 Differences between the various players

[1] Some promotional spots are dedicated to promotional bundles of several films, often catalogue films; these bundled films were not identified and therefore not considered in the analysis. The share of recent films is therefore somehow overstated.

[2] Figure calculated on a country per country basis, without eliminating the double counts (i.e. films repeated) between countries.

Download the report: The Origin of films and TV content in VOD catalogues in the EU & Visibility of films